Artist in Residence on The Upper Thames 1993/4

Supported by the Arts Council and sponsored by Allied Lyons, a series of six residencies were set up, one on the lower, tidal river and another above the locks every year for three years, during the period leading up to the inauguration of the Thames Path National Trail.

I was awarded the fellowship for the Upper Thames for the first year. The brief was to walk the river, make contact with the working community, establish a perception leading to a body of work, a report and proposals for a strategy for public commissioned work.

During the year I gravitated to the principle of control of flow and level and consequently collaborated with the (then) National Rivers Authority, Thames Water, Hydrological Engineering organisations such as HR Wallingford, archaeologists, historians and many other individuals with a very particular perception of the river. The outcome was a study of the control of flow at wier points and in particular, a study of standing wave structures (energy dissipators) generated by differently designed weirs.

I produced a large number of studies of water structures and two large detailed drawings of two specific types of weir structure at Romney, Windsor and Boulters Weir, Maidenhead. The report, “Thames Path Public Art Strategy” is held in the archive of the River and Rowing Museum, Henley on Thames.

These photographs and sketchbook drawings show an orthodox ‘overfall’ type of weir and a more heavily engineered ‘undershot’ structure. 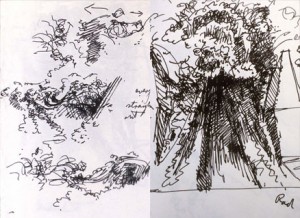 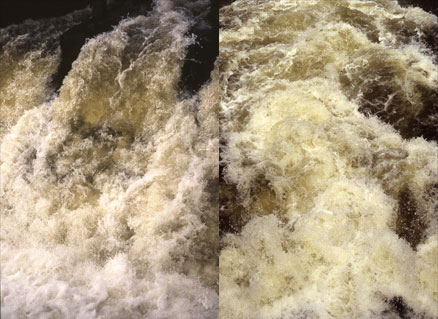